In less than twelve hours, the Seattle Mariners and Oakland A's will kick off the 2019 MLB season at the Tokyo Dome.  Now I'm 100% for bringing MLB baseball to other countries.  I also think it's really cool that Ichiro will have the opportunity to play in front of fans who have been supporting him since the early 90's.  I just think it's silly that they'll play two regular season games, then come home and play three more Spring Training games.  #shakingmyhead

I realize that there are probably some really good reasons for this scheduling decision, but I'm just not in the mood to try to comprehend it. 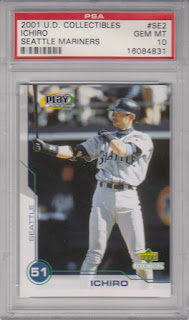 I actually had to do a double take when I saw this card on my purchase history:

I've never actually submitted any cards to PSA, but I'm curious to know if single card submissions were ever $2.83 or less.  And even if they were... I'm still surprised they'd sell a PSA 10 graded Ichiro rookie year oddball issue for this price.  #shakingmyhead

Well that's it for today.  Although I'd love to see Ichiro have a great outing in the Japan Opening Series, I'd love to see the A's sweep the Mariners a tad bit more.  Worst case scenario is watching Ichiro go 0 for 8, while seeing the A's start the 2019 season 0-2.  If that happens, I'll definitely be shaking my head.

What are some things about the 2019 MLB season or the hobby that currently have you shaking your head?