Another Day, Another Goodbye 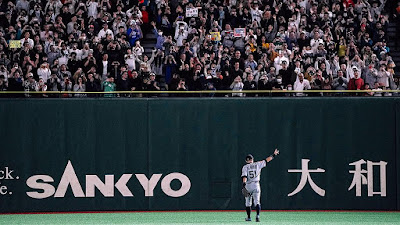 The first thing I did the past two days when I woke up was open up my laptop and head over to MLB.com to check the Mariners vs. Athletics scores.  Today I paused though as soon as I got to the website, because I saw that Ichiro had announced his retirement.

The guys on morning sports talk radio didn't make a big deal of it, because he had already made the headlines last year.  In fact they compared it to a dog dying at the end of the movie only to reappear later, and die again.  While I can see where they were headed with that analogy, I was actually a little annoyed by that comparison.

Ichiro has been one of my favorite baseball players since the early 2000's,  Part of it has to do with his ability to slap a pitch in seemingly any direction he wanted.  But a bigger part of it is he's the greatest Japanese baseball player to play in the MLB and I feel blessed that I had the opportunity to follow his entire career.

In regards to collecting, I walked away from the hobby when Ichiro collectibles were at his peak during his rookie year.  However when I returned in 2008, I knew I wanted to grab at least a few of his cards.  Within a few years, he became one of the guys I PC.

I originally had a graded card post planned for today, but in honor of #51, I postponed it and decided to show off the heart of my Ichiro collection.  Hope you enjoy it... 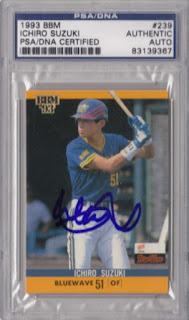 This card is the holy grail of my Ichiro collection.  It represents the only autograph of his in my collection and the most expensive single card I've ever purchased.  If I could only keep one card of his, there's not doubt in my mind that this would be it.

Here are the other two Japanese rookie cards I own:

When it comes to Japanese baseball cards, I'm an avid fan... but not exactly knowledgeable.  That's why I put my faith that these are legit issues in the hands of PSA and BGS.

I know that some people don't consider his 2001 MLB cards his true rookie cards, but I still enjoy collecting them when they're affordable: 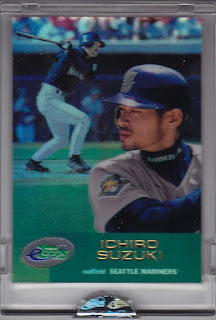 eTopps are like Japanese baseball cards.  I love to collect them, but aren't too familiar with their history.  This card reminds me of Topps Gold Label with it's dual image, crazy shine, and thicker card stock. 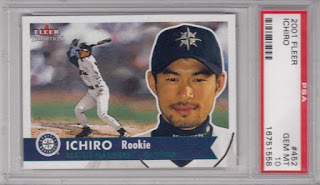 Fleer isn't dumb.  They know that there are a lot of collectors out there who appreciate the 1956 Topps card design.  I'm pretty sure that's what they were thinking when they designed this set. 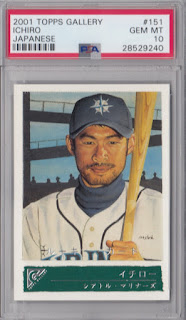 Yes, I realized I already showed off this card at the start of this post.  But that's how much I love this card.  I have two copies.  The one at the beginning of this post and his English brother are part of my 2001 Topps Gallery set.  This one is part of my PSA 10 collection.

Next up are my Ichiro memorabilia cards...

I'm a big fan of framed relics... especially the Ginters.  I'm missing a few of the Ichiros, but I'll hunt them down one day. 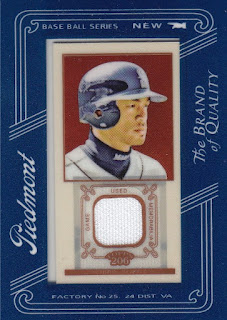 Now for my non-framed relics...

Here are a few game-used base cards... 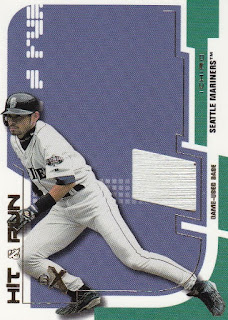 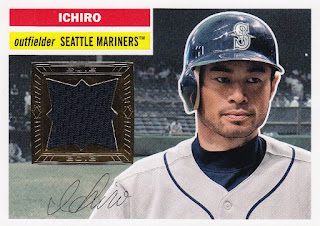 I could honestly show off at least 100 other Ichiros, but I don't have time for that.  So I'll wrap things up with a few more cards containing fabric, yet don't claim to be game used: 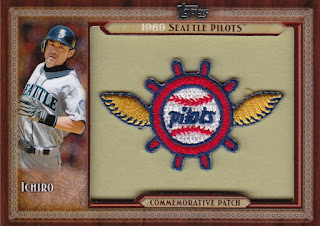 Well that's a wrap.  This month has been filled with goodbyes.  First my mom.  Now Ichiro.  In a few weeks, one of my friends will be going on maternity leave and moving to the Central Valley.  But I'll probably write about that another day.

This post is dedicated to #51.  Thanks for the memories and being one of the inspirations for my Japanese PC.  I'm sure I'll be blogging about you in a few years when you become the first Japanese player enshrined in Cooperstown.