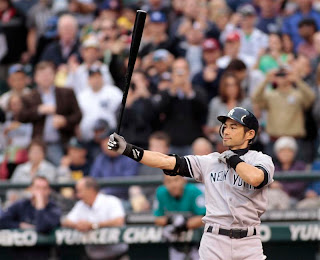 Great minds often think alike.  These are the words of fellow collectors, sports fans, and bloggers in response to hearing about the trade that shipped Ichiro to the Yankees.  And truthfully... I agree with them 100%.


I hate to sound like a broken record, but I'll go ahead and say it again.  I have a huge admiration for athletes who spend their entire career with one franchise.  But in the era of "free agency", it's becoming more and more uncommon for athletes to stick with the same team their entire career.  Sometimes they leave for more money or an increased opportunity to win.  Other times, the teams can't or don't want to resign the players.  And of course there's the case of one of my favorite players... the aforementioned Ichiro Suzuki... who was shipped off in a trade.


This got me thinking... "which athletes hold the records for playing for the most franchises?".  After a quick trip to Google, here are the record holders for three of the major sports played in the U.S.:

Last December, Dotel signed with the Detroit Tigers and made an appearance in the second game of the season to become the first player in MLB history to play for 13 different MLB franchises.

All four of these guys have played for a record 12 different NBA franchises.

During his 17 year career, Sillinger played for 12 different NHL franchises.

Unfortunately, I wasn't able to find an official record holder for football.  But my research led me to the following football players.  Deion Sanders and Jeff George each played for five franchises during their careers.  Vinny Testaverde played for seven different teams during his 21 year career.  Jeff Brady, a retired linebacker from the 90's and Tillie Voss a tackle from the 20's each appeared in games for eight different teams.


So there you have it.  Who would have thought that Octavio Dotel, Joe Smith, and Mike Sillinger are all record holders?

Ask me a sports or hobby related question.


I'll set the deadline for Friday at 3pm (PST).  I look forward to reading and responding to your questions.