The Wait is Over

The wait is finally over.  I'm not talking about the 2020 MLB season starting in a few weeks.  Sure that's exciting news... but it's still over three weeks away.

No... I'm referring to my COMC order finally arriving.  I had originally requested my inventory to be shipped back on March 27 and was given an estimated shipping date of May 25th.  Due to the pandemic, this wasn't a surprise and not a problem.

The problem arose when May 25th came and went without hearing any sort of update from the company.  I emailed them without receiving any sort of response.  A few days later, I read a Blowout Forum thread about others having the same issue which didn't make me feel any better.

Then out of the blue, I receive a shipping confirmation from them last week... and voila... a package arrived in my mailbox.  There were forty-seven items shipped to me.  I'll be writing individual posts for a few of these singles.

Today's post will highlight the rest of my COMC haul which I've broken down into six parts...

Although I haven't officially announced this set build, I've been slowly acquiring singles from this set whenever I can find them for $2 or less.  With the addition of these five, I now have twenty-two of the forty-eight cards in the set.

The days of trying to own an autograph of every A's top prospect is in the past.  I'd rather be patient and wait to see which players will stick around longer than a cup of coffee.  Matt Chapman and Matt Olson have proven to be valuable commodities to the Athletics and Ramon Laureano is well on his way to becoming one too.  I picked up this trio of autographs for under the price of a blaster, which is a number I can live with.

I also grabbed these two autographed rookie cards of Laureano for $24.  This brings me to six of his signatures, which is plenty.  From this point moving forward, I'll only pick up on-card autographs if I find them for $5 or less.

These two cards were purchased in early January... when I decided to try and build this sixty-four card relic set.  They're also the final two cards to reach my hands and complete the project. 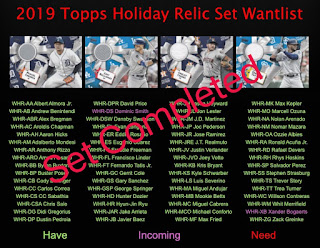 I get it.  The Oakland Coliseum is a joke to 99% of baseball fans who are reading this.  But to me, it represents my childhood and has been the home of my favorite team for as long as I've been a fan.

That's why I fell in love with the 2019 Topps Oakland A's team card the first time I saw it.  I immediately started working on a 9 pocket page filled with the base card, which I completed a while back thanks to Sportlots and a few bloggers.  Now I'm trying to acquire as many different parallels of the card.

Right now I have these two, plus the Rainbow Foil and 150th Anniversary parallels waiting for me over at COMC.  There are also a few others on the site, but I refuse to pay more than $2 for any of them.  I guess you can say I'm in it for the long haul.

Steve Caballero is a local legend and I've been a fan of his since the mid 80's.  I was pretty stoked to discover that Upper Deck included him in their 2019 Goodwin Champions product and immediately picked up all of these singles for $18.62.

These cards pair up well with the signed deck I purchased last year.  I actually still have my Caballero board from the late 90's.  Unfortunately, I sold, gave away, or dumped the one I rode as a kid.

I'm pretty sure this was a blog inspired purchase... but I can't remember where I originally saw this card.  Anyways... I missed the boat on an affordable Ronald Acuña autograph.  Wasn't going to make the same mistake with Albies.

Another blog inspired purchase?  This is the fourth card I've picked up from this set.  If you are a Batman fan, you can see the other three here.

Just like the Oakland Coliseum, Krazy George is a part of my childhood.  This is the third Ginter autograph of him that I've purchased.  Now I just need to track down the red ink (#'d to 10) to complete the collection.

The Walrus is another Bay Area legend.  Well at least to me.  He taught and coached at my high school (about a decade before I arrived), then went on to coach both of my favorite football teams.  I was excited to cross this card off of my list.

The last card of the day is one of those silly buyback one of one cards.  Normally I don't have an issue with buyback cards, especially when they're stamped.  But this is one of those situations where I would have much rather own a this card without the Vault stamp.

I really enjoy the late 90's and early 2000's memorabilia cards produced by In The Game, because they were tough to pull and well designed.  I was drawn to this card, because the swatch of jersey came from the 1997 NHL All-Star Game that took place at the San Jose Arena.

That was the game where Owen Nolan called his shot against The Dominator to earn the hat trick in front of the hometown crowd.  Bourque and this swatch of jersey was on the ice for the first of Nolan's three goals, but not sure about the one in the video.

Well that wraps up today's post.  I'm currently sitting on seventeen more cards at COMC that I haven't requested shipment on.  Although if I did make the request, it looks like I wouldn't receive my cards until at least October.

I look forward to reading and replying to your responses.  Happy Tuesday and sayonara!
Posted by Fuji at 3:00 PM