On June 24th, 1979, Rickey made his first appearance as a major leaguer for the Oakland Athletics and went 2 for 4 with a double against the Texas Rangers. He also stole the first of his MLB record 1,406 career stolen bases.

It didn't take long for The Man of Steal to become a superstar and my favorite player until the A's traded him to the New York Yankees in 1984. He would eventually come back to Oakland as a free agent in 1990 and although Tony Gwynn had become my new favorite player, Rickey was still my favorite Athletic.

During his 25 year career, he jumped around the league and played for 9 different teams. But he spend 14 of those seasons with the Oakland A's and played 1,704 games with them, which is the 2nd most in franchise history. In fact, he's all over the A's record books:
6,140 At Bats (2nd All-Time)
1,270 Runs Scored (1st All-Time)
1,768 Hits (3rd All-Time)
1,271 Singles (2nd All-Time)
2,640 Total Bases (4th All-Time)
289 Doubles (6th All-Time)
1,227 Walks (1st All-Time)
867 Stolen Bases (1st All-Time)
His career numbers are even more impressive which is why he was a first ballot hall of famer in 2009 and is considered by many to be the best leadoff hitter in the history of the game. More importantly... he's one of the greatest Athletics to take the field in Oakland and he's one of my all-time favorite players. 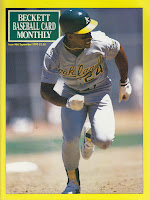 Here's your question of the day...
Who were your childhood favorites (players)? Do you collect their cards & memorabilia? If so, what's your favorite item (of your favorite childhood player) in your collection?
1 point - Leave your response below.
3 points - Post your response your blog and leave a link below, so other can enjoy what you wrote.
I'll accept responses for this post until Tuesday at 3pm (PST). I look forward to reading all of your responses.
Here's my favorite Rickey Henderson item: 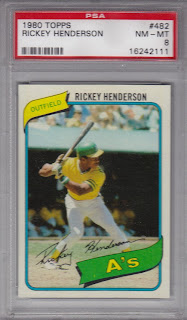 If I had to rank my favorite cards, this one would have to be somewhere in the top 50. It features a classic photo and a decent design. Plus it's hard not to think about 80's rookie cards without including this one. Okay... that's all I've got.
By the way, if you're interested in checking out the current contest standings are click here.
Happy Sunday & sayonara!
Posted by Fuji at 6:00 PM