For years, I was thinking that MaryAnn from Gilligan's Island was my first celebrity crush and the odds are she was.  Then a few weeks ago, I watched this:
I'm not sure if it popped up on my suggested videos or if I looked her up because one of you wrote about her... but within ten seconds of watching the opening to The Mary Tyler Moore Show... I started having flashbacks from my childhood. 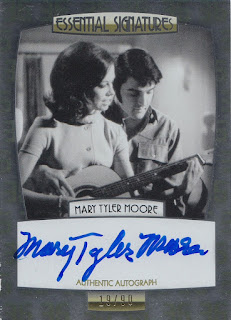 2012 Press Pass Essential Elvis Signatures Gold #ES-MTM (#'d 19/90)
Most of the lyrics had slipped my mind, but I remember the tune like I remember my mother's voice.  There was also the twirl she does at the very end and her trademark smile that reminded me of just how pretty she was to this four year old boy. 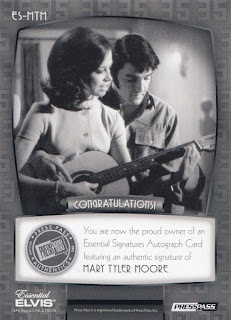 Budget cutbacks or not, I went over to eBay and found this autographed card.  I utilized the best offer feature and the seller accepted my $35 (+ $5.75 shipping + $3.24 tax) offer.  I realize this isn't a cheap autograph... but Mary passed away a few years ago and she only has a few signed cards available.
A few days earlier, I added the autograph of another celebrity crush to my collection: 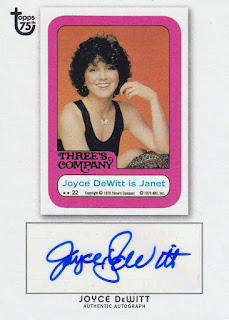 2013 Topps 75th Anniversary Autographs #NNO
If this looks familiar, it's because two other bloggers have added this card to their collections recently as well:  Matt and Night Owl. 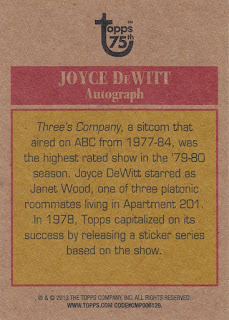 When I was growing up, Three's Company was one of my favorite shows and it still ranks up there after forty years.  And while most of my friends were gawking at Chrissy (Suzanne Somers), I was into Janet.
Before we get start moving forward on the celebrity crush timeline... I don't want to forget the 70's television version of Wonder Woman... 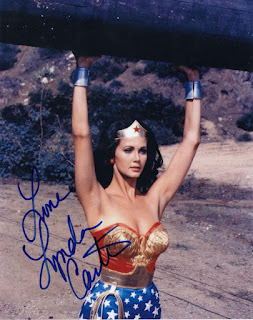 Signed 8x10 Photo
The pattern of brunette celebrity crushes had be established and would continue through the 80's and into the 90's: 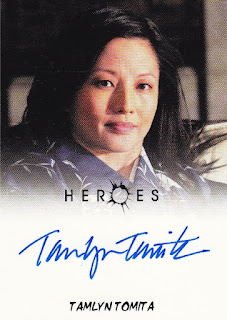 2010 Rittenhouse Heroes Archives Autographs #NNO
Don't recognize Tamlyn?  She played Daniel-san's girlfriend in Karate Kid II.  The lines are a little blurry, but she might have been my first adolescent celebrity crush.
A few years later another Japanese celebrity came along... 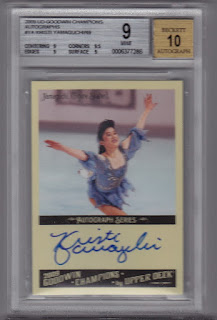 2009 UD Goodwin Champions Autograph #A-YA
Can athletes be celebrity crushes?  If not... luckily Kristi had a role in D2: The Mighty Ducks.
As we head into the 2000's... my attention transferred to this beautiful Cylon...

A Baseball Card Breakdown Custom
Grace Park is one of the most attractive actresses on the planet.  That's why when I won a contest over on Gavin's blog a few years ago... I chose to have him make this custom card of her.
Looks like I've established another pattern.  Let's see if it continues... 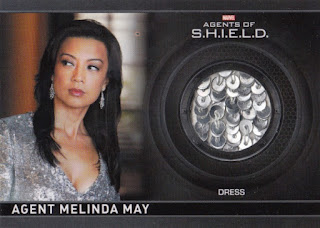 2015 Rittenhouse Agents of SHIELD Costume Cards #CC3
Can you believe Ming-Na Wen is approaching 60?  Me either.  She's recently starred in The Mandalorian... but before she was a bounty hunter in the Star Wars Universe, she was a S.H.I.E.L.D. agent.
And just in case you're wondering, I don't discriminate.  Here are a few other celebrity crushes I've had over the years:
And no, I'm not only attracted to Asians... 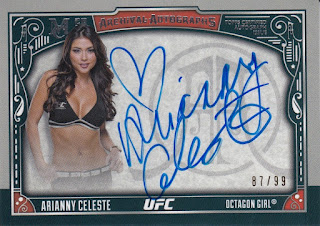 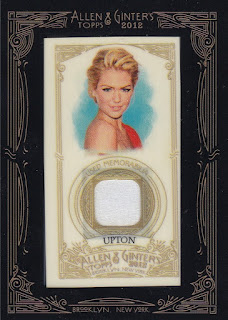 2012 Topps A&G Framed Mini Relics #AGR-KU
I've seen this card pop up on several other blogs which isn't a surprise.  Who doesn't find Justin Verlander's wife attractive?
But ultimately... I'll wrap things up with the woman who is most likely the original celebrity crush... 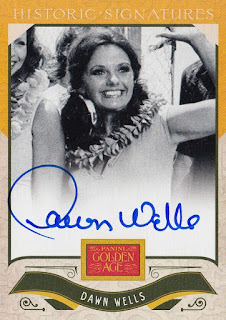 2012 Panini Golden Age Historic Signatures #DW
Well that's the collection for now.  I'm hoping one day someone will have Phoebe Cates or Constance Wu sign cards, because I'd love to add both of these women to the collection.
Until then....
Do you remember your first celebrity crush?
Happy Tuesday and sayonara!
Overtime 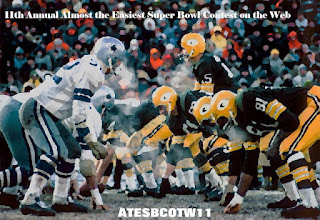 Cynical Buddha's annual Super Bowl contest is up and running.  It's practically the easiest contest on the web.  Just click here to see how easy it is for yourself.  You won't regret it, I promise.
Posted by Fuji at 3:00 PM