I've never really considered myself to be the "jealous" type.  Sure I'm a little envious when I see Bryan's Cutch collection, Gavin's Mike Trout autographs, Greg's Pee Wee Reese, or Jim's incredible Hall of Fame collection.  But deep down inside I'm just glad that they've taken the time to show them off on their blogs, so we all can appreciate them.
Plus if I really, really, really wanted to... I could sell off some cards and pick up most of the singles I want out there as long as they were available for sale and weren't five figures or more.
On the other hand... there is one thing I can't buy... that many of you out there have.  And that's a better memory.
Whenever I read a post about someone's first baseball game attended or the first card they pulled out of a pack... I'm the guy who always responds "I wish I could remember that".  I have plenty of childhood memories, but specific things like that have slipped my mind over the years.  That's one of the reasons I continue to blog.  It helps me document new "firsts".
Today I'll be sharing this Ed McGhee that Bob over at The Best Bubble sent my way: 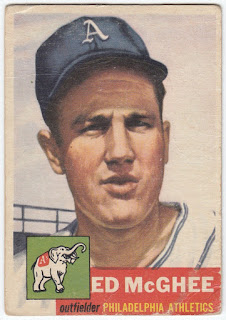 1953 Topps #195
I've been collecting for forty years, have worked at two card shops, and have accumulated 100's of thousands of cards over that time... but this card represents the first 1953 Topps baseball card I've ever owned. 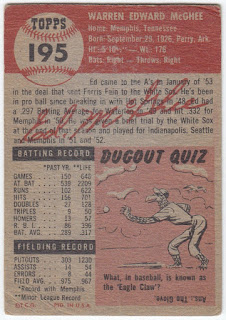 I've always had mixed emotions on this set.  Although I like the overall look of them the 1953 Topps set failed to crack the Top 16 when I ranked my favorite Topps flagship designs in 2016.  Now that I'm staring at one in real life, I think I might need to go back and revise my list.  But today let's just appreciate the beauty of this sixty-eight year old piece of cardboard. 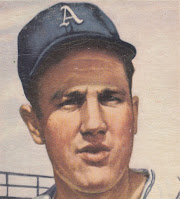 It all starts with the gorgeous portrait painting of Mr. McGhee.  I was really impressed with the shadows, forehead wrinkles, and double chin the artist included. 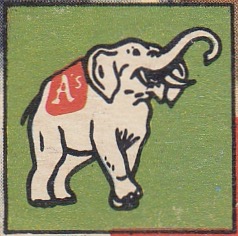 I also love the old Philadelphia Athletics logo with the white elephant and A's logo on its back.  Although it seems to be missing the baseball the elephant normally grasps with its trunk.  Speaking of baseballs... 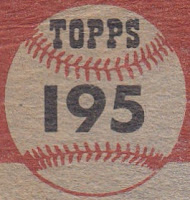 As Night Owl pointed out a few weeks ago... Topps nailed the stitching on their 1953 baseball cards.  If I was ever going to design a card, it would definitely include the card number within a baseball on the back.

I'd also make sure it included a cartoon that included an interesting fact about the player or a piece of baseball trivia for fans.  I remember buying Eagle Claw fishing hooks when I was a kid, but never knew it was another name for baseball glove.
As for Warren Edward McGhee...

He seems to be famous for being part of the deal that sent Ferris Fain to Chicago in January of 1953.  At the time of the trade, Fain was a 3x AL All-Star and had won back to back batting titles for the Athletics in 1951 and 1952.  Not exactly sure what role McGhee played in the trade... but the key piece that A's received in return was Eddie Robinson.
Thank you Bob for sending me my very first 1953 Topps baseball card.  It's hard to quantify how much joy I received holding this card in my hand, but I assure you that I truly cherish it.
But wait... there's more.  He also sent me over 50 other A's cards in his care package.  The cards ranged from vintage to 80's minor league cards to 90's inserts.  Here's a sampling: 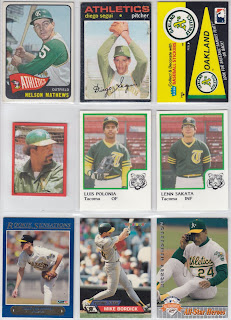 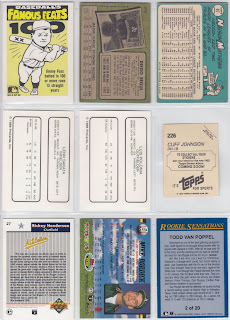 He also included this shiny rookie autograph of Kendall Graveman:

2015 Topps Chrome Refractor Autograph #AR-KG
If you're a disgruntled Rays or Cubs fan... well I totally feel your pain.  Remember when the A's sent Josh Donaldson off to Toronto?  Graveman was one of the pieces A's fans received in return.  He's now in Seattle where he seems to have found a home in their bullpen.
Rounding out Bob's care package were some wild cards: 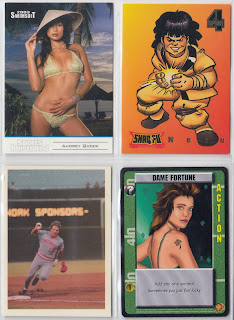 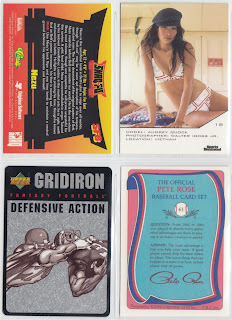 The 1985 Topps Renata Galasso card of Pete Rose has a great looking action shot, but my favorite "wild card" was Audrey Quock rookie card.  No idea who she is... but she kinda reminds me of Pete's girlfriend.
Thanks again Bob!  You have a very specific list of things you collect... but I think I can find a few items to send your way.  If not... I'll have to do a little shopping.
As for the rest of y'all...
Where does the 1953 Topps rank among their flagship baseball card designs?
I'll have to put some thought into it... but I'm thinking it'll land somewhere in the Top 12 to Top 15 range.
Happy Monday and sayonara!
Posted by Fuji at 9:00 AM