It's been a long time since I've had anything really to cheer for in regards to the San Diego Padres.  I couldn't tell you the last time I actively searched for a card of a Padres player that was on their active roster.  I'll guess it was either Matt Kemp or Derek Norris.  Maybe Manuel Margot.  Who knows... who cares.

The fact is... that has completely changed.  I'm no longer only looking for Tony Gwynn, Ozzie Smith, Dave Winfield, Trevor Hoffman, and other Padres legends.  The past two months, I've also been chasing down cards of Fernando Tatis Jr.

The first Tatis card I purchased actually took place in 2016 at the Serramonte Mall Sports Card, Toys, and Collectibles Show.  That day I picked up a bunch of Bowman Chrome colored refractors for 5¢ each.  And one of them happened to be this card: 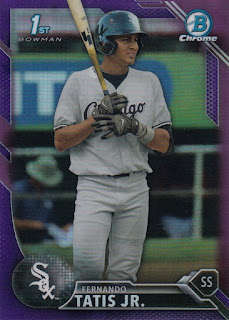 This is a prime example of why I won't pass up bargain priced refractors of prospects.  This particular card even has the 1st Bowman icon that prospectors get excited about.

Tatis has cooled off the past few weeks, but people are still willing to pay a decent dime for this card.  On Tuesday one of these purple refractors sold for $112.50 (+ $3.74 shipping).  That's down from a couple of Sundays ago when another one sold for $143.49 (+ $3.95 shipping).  I'm sure prices will continue to slide as long as Fernando's statistics continue to slide.  But that's okay with me, since I don't intend to sell it.

Next up is the first purchase I made of Tatis, while actively seeking him out: 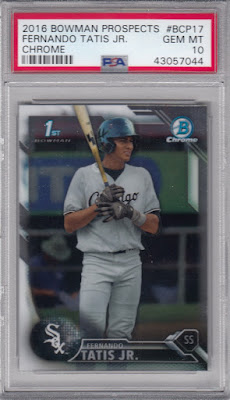 A few days after picking up the graded card, I bought this: 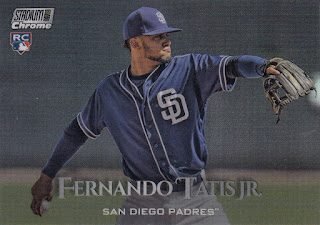 My scanner sucks.  I wish you could see how shiny and reflective this card really is.  Topps inserted them into 1:64 2019 Stadium Club packs, which is a reasonably tough pull when you consider that there are 90 different cards in the set. 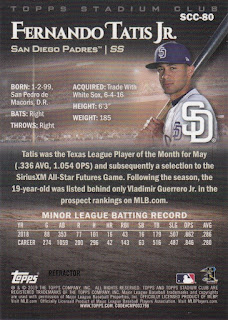 I found it on eBay and offered the seller $20 (free shipping).  He accepted and the rest is history.  I also grabbed a couple of the base Stadium Club rookie cards at flea market last month for a buck a piece.  I didn't include them in this post since most of you have already seen them.

However here's a different Tatis I purchased from the same vendor (with the Stadium Club rookies), but at a different flea market:

He increased his Tatis rookie card prices from a buck to two dollars.  If this was any other vendor, I would have passed.  But it's my buddy and he's hooked me up plenty of times in the past.  I made a few other flea market purchases that day.  Hopefully I'll have that post up in the next week or so.  Stay tuned.

The fifth and final Tatis card I have for you today is my very first Topps Living purchase:

This wasn't purchased directly from Topps... it was an eBay purchase.  Found a guy who would sell me three for $21 (free shipping).  I didn't realize until after I accepted his offer that Topps produced over 10,000 copies of this card.  That seems like a super high print run.  Oh well.  It's still a cool card.

One of these days, I'd like to pick up an autograph and memorabilia card of El Niño.  However right now they're a little too pricey.  I'll wait until he has some second year "hits" which should be much more affordable.

Now I know what some of you are thinking.  I'm crazy for going "all in" on a rookie.  Well... I can assure you that from this point out... I'll be sticking to bargain priced rookie cards.  And I complete understand and accept that Tatis could very well be the next Gregg Jefferies.  But in the meantime... I'm gonna soak it up and enjoy watching Tatis and Padres baseball.

Do you actively chase rookie cards?  If so, who's your current flavor of the month?

And just in case you thought this post was going to be about the Chris Farley skit, here you go: