Back in college, some of my most memorable vacations were road trips with my friends down to Southern California and Tijuana.  Fast forward a few decades and I still enjoy a good road trip and Southern California.  As for TJ... well let's just say my body can't handle that town anymore.

Last weekend my buddy, Mike and I hopped in my car and drove down to Los Angeles for a three day adventure that included a Dodgers game, meeting a fellow card blogger, visiting a pair of card shows and a card shop, and exploring some mom-and-pop antique shops.

Click here if you're interested in reading about the our first day on the road and the Dodgers game we attended.

Today's post will focus on Day #2 adventures.  Earlier in the week, I had reached out to Ryan over at Japanese Sumo Wrestling Cards and Menko to see if he'd be interested in getting together.  He wasn't able to go to the Dodgers game, but he cleared his Saturday morning schedule and met us at the Frank and Son Collectible Show.

We started off walking around the show together, but within twenty minutes or so, we were all on our own.  I was kinda bummed out by the number of card dealers there.  I'm guessing there were less than ten vendors with trading cards (not including the special section dedicated to gaming). 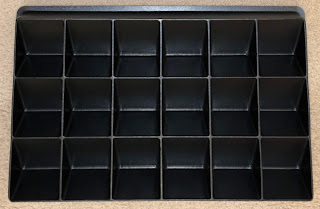 The only thing I walked out of there with was this cheap plastic sorting tray.  I was looking for one of those BCW sorting trays that Sport Card Collector uses, but nobody had any, so I settled for this.  We eventually met up and decided to head over to a card show at Damien High School in La Verne. 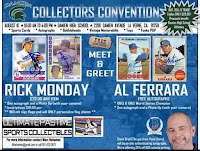 Rick Monday and Al Ferrara were signing autographs, but the lines were pretty long and I didn't have anything to get signed. 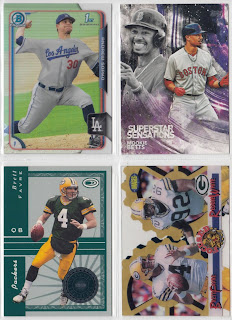 There were probably twice as many card dealers at this show, but there weren't a lot of bargains to be found.  One guy did have a quarter bin (or five cards for a buck), so I grabbed these four cards and a basketball card for Ryan.

This card is sort of a hidden gem.  Back in the mid 90's, this card would have fetched around $20.  These days, you can sometimes find them sitting in quarter bins.

After walking around two card shows we were getting hungry, so I suggested Del Taco which is a Mexican fast food joint similar to Taco Bell.  I can't speak for Ryan or Mike, but I loved their bean and cheese burritos.  They were so good, I convinced Mike to go back there for dinner that same day.

Thanks for lunch Ryan! 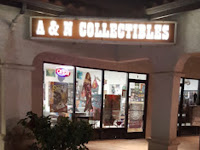 Ryan mentioned that Saturday, August 10th was National Baseball Card Day, so with our bellies full, we headed over to A&N Collectibles in San Dimas.  As soon as we pulled up, Mike and I recognized this place from our road trip back in 2014.

As soon as we entered the shop, one of the employees handed us our complimentary pack of cards:

Mike doesn't really collect cards, so he hooked me up with his free pack.  Here's what I pulled: 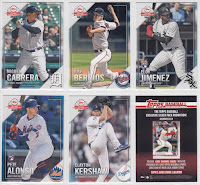 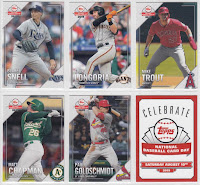 Plus if you spent $10, you were given a special Bryce Harper card.  And if you purchased $20 worth of product, you received the Harper and Vladimir Guerrero Jr. card.

Now if you're a regular reader of my blog, then you know how much cool stuff Ryan has sent over the years.  I want to return the favor, but his collection is very specific and sometimes it's hard to find things for him.  That's why I figured I'd buy him something here since who doesn't enjoy opening up packs of cards. 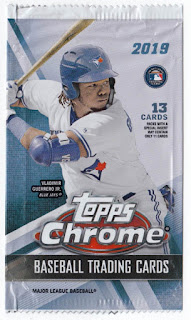 After looking at my options, I ended up going with two jumbo packs of Chrome.  I was blown away by the $20 price tag... but figured it would be cool to see one of us pull a Guerrero or Tatis autograph.

Spoiler alert.  Neither of us did.  But we did beat the odds and each of us pulled an on-card autograph.  Here's mine: 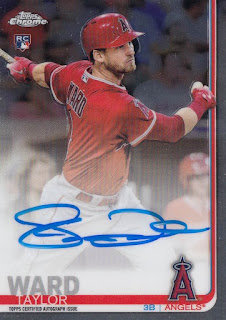 Not familiar with this guy, but I did pull a few cool cards of guys I recognize:

Plus a rookie refractor... 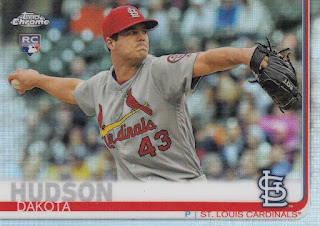 Hudson is another guy I don't know much about... but he's currently leading the Cardinals in wins.  That's better than leading them in losses.

And just in case you're curious... here's the rest of my pack: 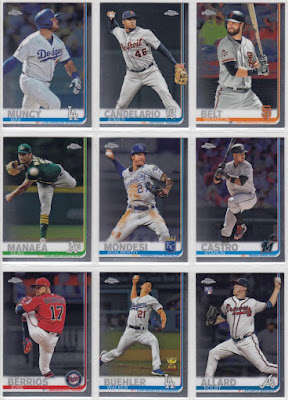 Oh and since I spent more than $20, I received these two National Baseball Card Day bonus cards:

After the card shop, we headed back into La Verne.  Only this time we checked out some antique stores.  I ended up buying some Amish Butterprint Pyrex bowls for my friend who collects these.  But I'm sure you don't want to look at pictures of bowls.  Don't worry, I actually found some cards too. 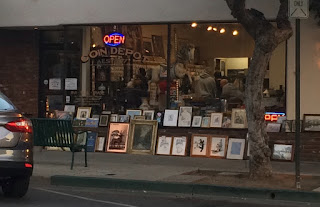 Five years ago, Mike and I discovered this store called the Coin Depot where I purchased some affordable vintage cards.  We went back there again and guess what... I found more vintage cards to purchase.

As soon as you walk into the store, there's a shelf on the right hand side with boxes filled with cards in semi-rigid holders.  The Gibson had a $2 sticker price, while the Robinson was a buck.  Neither are in nice condition, but they're great additions to my vintage binder.

I also grabbed this Hellboy sketch card that had a $2.50 price tag:

I'm not the biggest fan of Hellboy, but I'll pretty much buy any pack pulled sketch card for $2.50.

One of the people working at the store told Ryan there were more cards in the back of the shop, so when I finished paying for these cards I joined him.  I was blown away by the number of cards they had hanging on the walls and sitting in boxes.  I honestly was a little overwhelmed, but I did manage to pull a few cards out.

The first three cards were priced at $3 each.  I don't follow basketball anymore, but even non-basketball fans know who Anthony Davis is.  The last time I did watch the game, Deron Williams was one of the top point guards in the game.  I figured both of these cards were pretty solid deals.  As for the McCaffrey... he was a beast at Stanford and he's been pretty solid in North Carolina.  I thought this was a rookie card, but it's actually just a shiny insert.

The other card wasn't priced, but the guy threw it in for a buck: 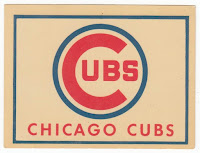 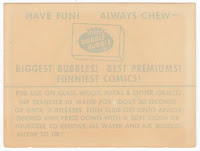 Had no idea what this was... but I love collecting Fleer stickers.  Now I just need to find a Kansas City A's sticker to go with this one.

While waiting for Ryan to finish up in the back, I noticed that they had some boxes behind the counter.  I got excited when I saw this one: 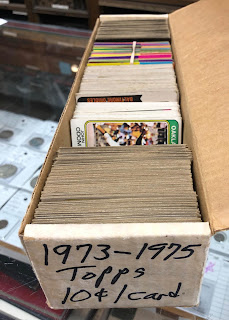 I honestly was expecting to find commons, but to my surprise I was able to really bolster my vintage binder with these: 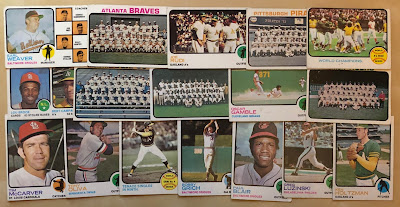 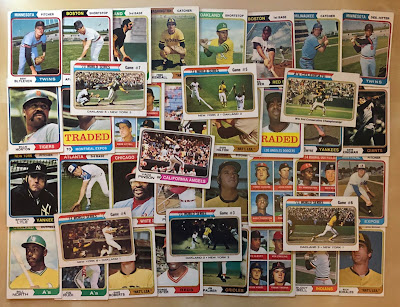 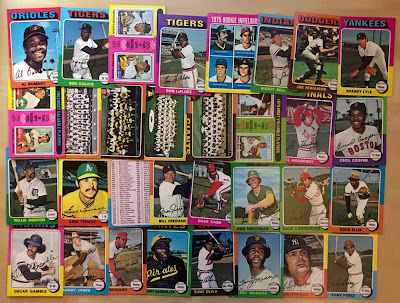 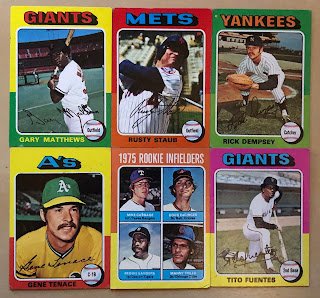 I honestly can write a few paragraphs on these singles alone... but I've done enough writing for today.  So I'll let the photographs speak for themselves.  By the way, there were more than 60 cards in the lot.  I just removed any doubles and he hooked me up with a discount since this was my third purchase of the day.

After the Coin Depot we went to the La Verne Brewery.  I'm not a big beer guy, but Ryan was hoping to buy some and bring it home.  After we grabbed the beer, we went looking for one final antique store.  Unfortunately it was closed.

By this time it was around 2 or 3 in the afternoon and Ryan had to go home and spend time with his family.  It was really cool hanging out with him.  Usually it takes some time for me to warm up to people, but when we were hanging out, it was like we had known each other for years.

I've already extended him an invitation to a Bay Area card show in September.  Hopefully he'll be able to fit it into his schedule.

Oh I almost forgot.  He gave me an envelope filled with goodies.  If things go as planned, I should have something written up by Monday.  And hopefully I'll have the final leg of our road trip up on Tuesday.

Okay... it's time for today's question of the day:

Have you ever hung out with another card blogger?  If so, who?

I've been lucky enough to meet three different bloggers in person so far:  Brady @ St. Louis Cardinals' Cardboard, Rod @ Padrographs, and Ryan @ Japanese Sumo Cards and Menko.  I have also had the pleasure of hanging out and talking cards with avid card blog supporter... Mr. Havenkamp.

I'm also hoping to eventually meet the rest of the Oregon Blogging Crew:  Gavin and Kerry. 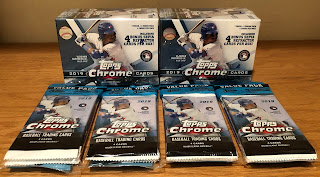 I almost forgot.  After Mike and I went to Del Taco for dinner, we stopped by Target on our way back to the hotel.  I went a little crazy and picked up two 2019 Chrome blasters and four 2019 Chrome value packs.  As of this evening, I haven't opened them yet.  But I will... and when I do, I'll make sure to share my results in a post.
Posted by Fuji at 3:00 PM